Detroit Foundation Hotel… Class in the Heart of Motor City

Motown, Motor City, “The D”… although known by many names, Detroit is also earning a reputation as an exciting travel destination. As discovered by travelers in search of authentic American culture, Michigan’s largest city has recently been named a ‘Best In Travel 2018 Top Ten City’ by Lonely Planet, and one of the ‘10 Coolest U.S. Cities To Visit in 2018’ by Forbes.

Situated on the shores of the Detroit River across from Windsor, Canada, the home of the American automotive industry has sustained its share of dings and scratches over the years.  It has taken tremendous community effort to regenerate downtown Detroit. Decades of economic and social instability had dented Detroit’s reputation but, with the grit, determination, and creative ingenuity Detroiters are known for, locals and transplants alike have transformed their beloved city into one of ‘The Best Places To Go in 2018’ (New York Post).

Michigan natives with a passion for resurrecting the city they love have joined forces with Motor City newcomers to inject vibrant energy into the city’s culinary, art, hotel, and music scene. Outdoor spaces have been designed to pull folks out of their offices, condos, and apartments, and into parks, leisure and event spaces, and welcoming indoor/outdoor restaurants and bars. Three state-of-the-art stadiums house four professional sports teams, and the Detroit International Riverwalk draws walkers, runners, and bike riders. In 2015, Detroit became the first US city named a UNESCO City of Design, and the city’s metamorphosis continues.

I hadn’t explored Detroit in years, and on a recent visit discovered an exciting, diverse community born out of a passion for the city, its resources, history, and community. ‘The D’ has morphed into a trendy, vibrant, cosmopolitan destination brimming with innovation and creativity. 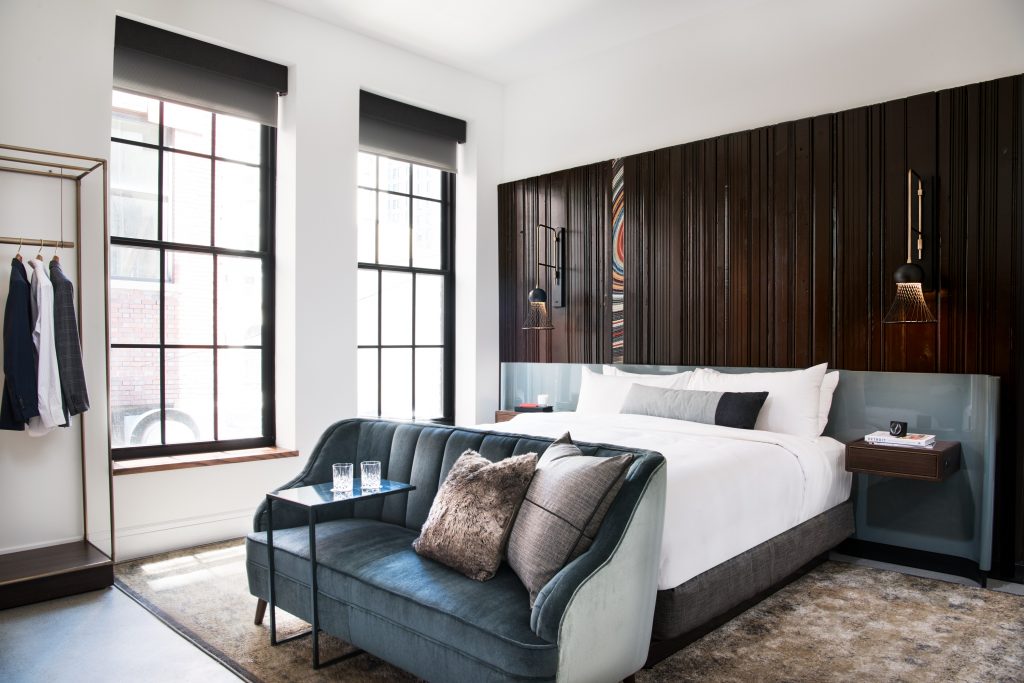 Detroit has re-emerged as a remodeled, polished, and very sleek version of itself, and the Detroit Foundation Hotel symbolizes that regeneration. Opened in May, 2017 in the former Detroit Fire Department headquarters, this iconic property was named one of ‘The Best New Hotels in the World 2018’ by Travel + Leisure. The five story, 100 room hotel is located in the heart of downtown Detroit, near the Cobo Convention Center and Campus Martius Park (a re-established downtown park that was first-ever winner of the prestigious, international Urban Land Institute Urban Open Space Award).

Recognized as the ‘Best Upscale Hotel’ in the 2017 Gold Key Award for Excellence in Hospitality Design, The Detroit Foundation Hotel is managed by Aparium Hotel Group, which develops independent hotels in unique locations. Aparium strives to create ‘Translocal Hospitality – a concept of creating hotel properties that appeal to both travelers and locals. For the Detroit Foundation Hotel property, Aparium collaborated with local design experts and artists who helped inspire the property’s transformation, and has created a Motor City experience exclusive to Detroit and its “makers.”

Says Kevin Robinson, Co-Founder and Chief Operating Officer of Aparium Hotel Group: “Detroit is a one-of-a-kind city, with a strong culture and unparalleled sense of pride that we hope the Foundation Hotel truly represents. One of the most rewarding aspects of creating hotels is learning about what’s at the core of its surrounding community, and this has been especially true for this project. We’ve had the honor of getting to know local makers, artists, innovators, and designers that have contributed immensely to the production of Detroit Foundation Hotel, and we’re thrilled to bring so many aspects of this city together to ensure the hotel is a meaningful addition to Detroit’s story.” 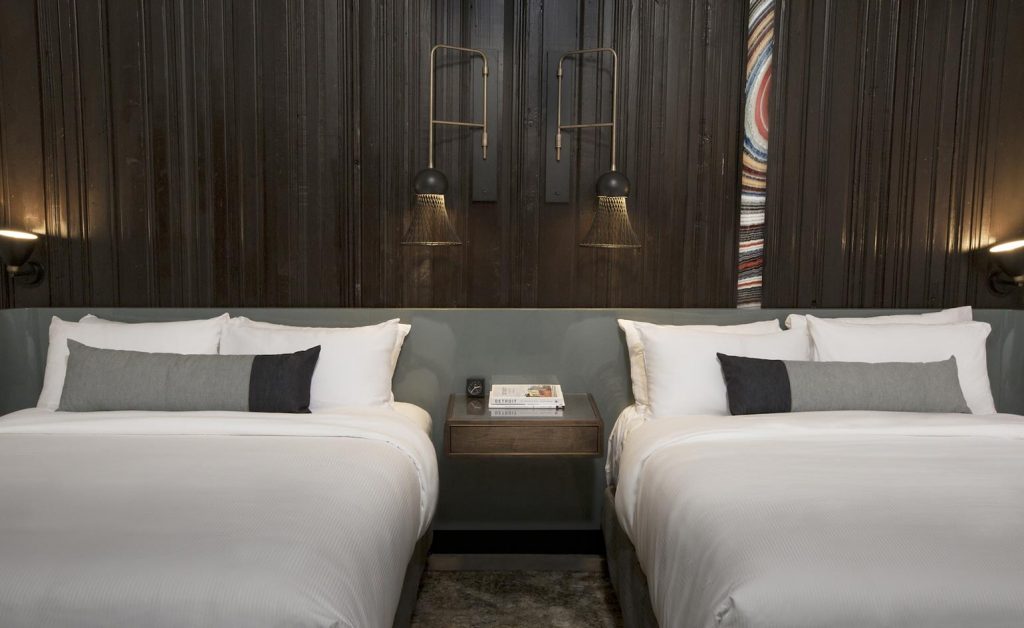 A Taste of Detroit

This collaboration with Detroit makers has been key to its success, and is appreciated by locals and visitors. A taste of Detroit is woven through every aspect of the Detroit Foundation Hotel experience, from staff uniforms from designer Roslyn Karamoko’s Detroit Is The New Black, to the cool Detroit Denim vests and aprons worn by the bartenders, to the locally-made Bon Bon Bon chocolates, to the hand-crafted door handles by local metalworking studio Smith Shop.

By honoring Detroit’s history and incorporating local craftsmanship and ingenuity, the Detroit Foundation hotel has won the American Institute of Architects Detroit Architectural Honor Award for buildings, and received the 2018 Governor’s Awards for Historic Preservation. The impressive façade of the hotel harkens back to the days the property housed the Detroit Fire Department headquarters.  Massive arched doorways, where fire engines once entered and departed the station, flank two sides of the building, allowing glimpses of the dramatic lounge, bar, and restaurant space inside.  Walking through the main entry, visitors pass through an appealing pop-up shop of tastefully curated, locally made goods on their way to the low-key check in area designed around vintage credenzas. On the left side of the entrance hall, The Apparatus Room, the hotel’s acclaimed restaurant, bar, and lounge area, beckons guests inside.

Serenity in the Heart of Motor City

Much of the guest rooms’ design is “inspired by the craftsmanship of past-era high-end automobiles,” and the design surprises guests with subtle details that are unmistakably Detroit. Along with the usual luxury amenities like same-day laundry and dry cleaning, valet services, complimentary Wi-Fi, and in-room dining, the hotel also offers complimentary Detroit Bikes rental, Netflix-equipped TVs, ice delivery, a podcast studio, a 24-hour fitness center and complimentary work out classes. The in-room, regionally-curated bar holds some of Detroit’s sweet and savory treasures (including locally made chips, cookies, chocolate, beer, vodka, and whiskey). For a creative way to “jump start your morning,” guests also receive red auto fuses that can be exchanged at the downstairs coffee bar for complimentary tea or drip coffee. 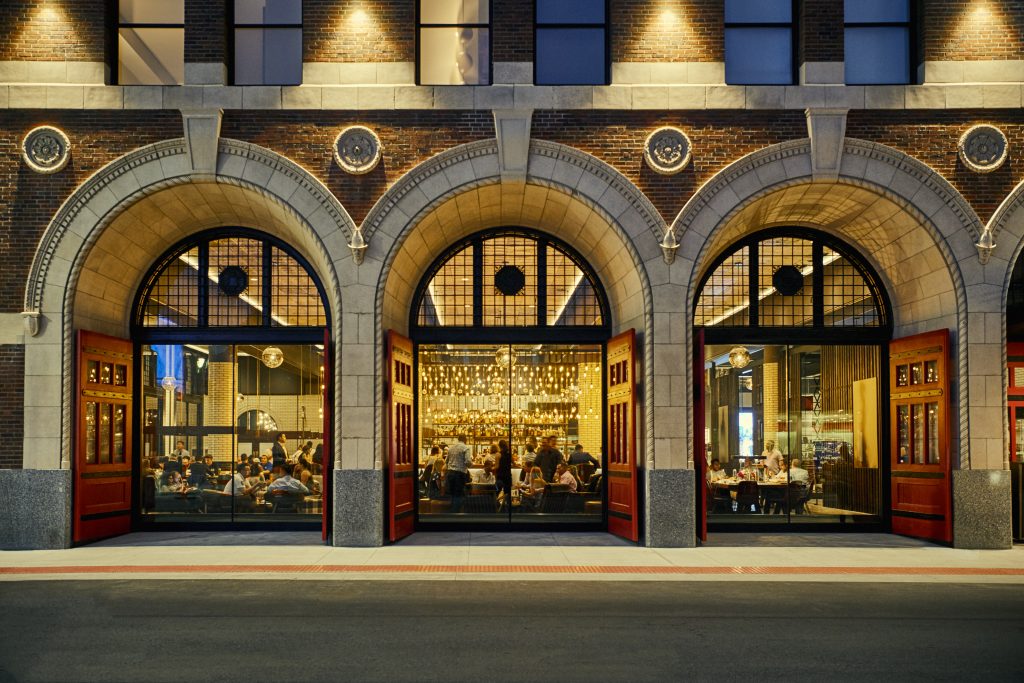 Locals and visitors alike have been flocking to The Apparatus Room, the buzzy restaurant helmed by acclaimed chef Thomas Lents, a Michigan native and two Michelin-starred chef.  Named for its original purpose in the fire department headquarters to house fire engines and equipment, the large restaurant, bar, and lounge space is airy but enveloped in warmth from soft, golden lighting and the rich textural elements of the industrial-comfort décor.

The Apparatus Room offers an exclusive – and popular – opportunity to enjoy a very special culinary experience, from a bite in the bar lounge, to an upscale meal featuring classic Midwestern ingredients, to a private Chef’s Table experience.

“I am thrilled to return home and join this exciting moment in Detroit’s story,” says Chef Lents. “In many ways the growth of the culinary scene in Detroit mirrors the growth and transformation we’ve seen in the city as a whole. As a chef, I am eager to work alongside the local farmers and food purveyors to bring our menu to life.”

Open for breakfast, lunch, dinner, and weekend brunch, The Apparatus Room also offers an all-day menu in the bar, especially nice if you want to work in the lounge or are arriving later in the evening.

This hyper-local focus on Detroit extends to the hotel’s events (like the ‘Foundation After Dark’ weekly music series featuring some of the most talented Detroit-based musicians), podcasts from the hotel’s Foundation Studio, and artwork that is integral to the hotel’s design aesthetic. Rotating exhibits and permanent installations by local artists augment the original structure with current, fresh visuals. I found one of my favorite exhibits by following the tongue-in-cheek “Don’t Look Up” directions posted on the wall in the first-floor hallway – a gorgeous lighting element by Kim Harty. The exposed-brick areas of the original fire house hose hang are now festooned with “cumulus bulbs” that look like small, clear, white balloons hanging by the dozens high overhead.

The design and décor of the Detroit Foundation Hotel echoes the refurbishment and transformation of the iconic Motor City itself. Indeed, a favorite souvenir from my hotel visit is a super soft, locally made T-shirt that reads “Say nice things about Detroit!”

That’s easy to do these days, so if you haven’t visited Detroit recently, it’s time to reacquaint yourself with ‘The D’.

We use cookies to ensure that we give you the best experience on our website. If you continue to use this site we will assume that you are happy with it.OkRead more